Dorayaki: The Next Hot Trend in Snack Cakes 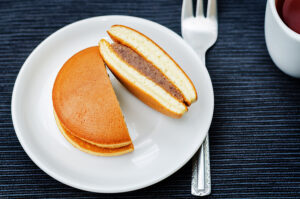 Snack cakes have maintained a consistent popularity among U.S. consumers since they were introduced more than 100 years ago. Both Hostess CupCakes and MoonPies date back to 1917 (Fig Newtons, with its is-it-a-cookie-or-a-cake controversy, debuted even earlier, in 1891).

A century later, the category continues to thrive because the products fit what consumers want: convenient, delicious, indulgent snacks. Like other packaged foods, the snack cake market is also being driven by consumer demand for premiumization, variety, and innovation.

Identifying the next big food trend is all about making an educated guess. In the snack cake category, we believe the product that’s best positioned to take off is dorayaki.

Dorayaki is a popular Japanese confection traditionally consisting of two small pancakes that are flavored with honey and filled with red bean paste. Like the most popular snack cakes in the United States, dorayaki was also first commercialized in the early 1900s, though its history goes back much earlier than that.

As dorayaki has grown in popularity and spread to other parts of the world, bakers have experimented with a variety of flavors in addition to the classic red bean paste:

Due to this innovation, today’s dorayaki represents a versatile snack category ripe with opportunity.

Why dorayaki is set to be the next hot snacking trend

Dorayaki is convenient, delicious, and innovative, meeting customers’ desires for interesting on-the-go snacks. But there are a few other reasons we believe dorayaki is set to make a splash in the U.S. market.

Especially with consumers’ growing interest in ethnic food products, looking at trends around the world can inform us about what the future might look like here at home. Dorayaki is currently very popular not just in Japan but also in Europe. In the bakery category, Europe is often a trendsetter for the United States, so anything that’s hot there is poised to also be hot here.

One way to learn what consumers want is to find out what they search for online. According to Google Trends data, there has been a steady increase in searches for “dorayaki” in the United States over the past 12 months.

Not only that, but dorayaki recipes have started to show up on popular North American food websites, such as The Spruce Eats.

Of course, we don’t have a crystal ball, but the snack category has been on a tear for the past few years and the growth trend is expected to continue even despite COVID-19. Consumers are still on the lookout for new products that taste great, offer convenience, and bring some excitement to their culinary lives. Dorayaki checks all of those boxes.

If you’re interested in capitalizing on this trend, we can help. We offer a complete dorayaki production line that can be customized for your needs. Learn more about this equipment in our recent press release. If you have any questions, please don’t hesitate to reach out!