Vegan Bakery Products Are Heating Up 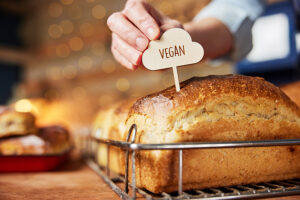 Interest in veganism and vegan foods is growing. In a 15-year period, the number of vegans in the US jumped from 290,000 to 9.7 million. Some surveys show that vegans make up as much as 6% of the US population.

Vegan foods will likely continue to gain popularity. More than 70% of future food leaders out of Cornell University believe the vegan/vegetarian diet will see the most growth over the next five years. And Allied Market Research predicts that the vegan food market, which had a $14.2 billion value in 2018, will reach $31.4 billion by 2026.

So there’s no better time to tap into this thriving market with vegan-friendly baked goods.

The top three reasons this year’s Veganuary participants decided to test drive a vegan diet were animal welfare concerns (46%), personal health (22%), and environmental concerns (21%). Health is becoming a more important factor in the decision to eat vegan, and nearly 50% of consumers expect vegan foods to be healthy.

So where do baked goods fit into the vegan movement? During the pandemic, 28% of consumers have been eating more baked goods, especially cookies (57%), bread (50%), and cake (42%). They also have become increasingly health-conscious and are more open to trying new things, making this a perfect time to launch new vegan bakery products.

But, so far, it’s an untapped opportunity. Only about 5.6% of new products in the bakery sweet goods sector have included vegan/vegetarian claims over the past five years, even fewer of which had prominent vegan claims. Yet more grocery shoppers are looking for this labeling when they shop, especially younger generations. About a third of consumers ages 18 to 24 said they find vegan packaging claims “very appealing.”

Consumers are also specifically requesting more vegan baked goods. More than a third say they’d like to see pies and pastry products get a plant-based makeover. Italian foods like pasta and pizza are also high on that list.

Of course, vegan products don’t contain traditional baking ingredients like eggs, milk, and butter or animal-based sweeteners like honey. Replacing these ingredients without sacrificing taste, texture, and functionality, however, might take some experimenting.

Baked goods are already primarily plant-based. So for some bakery products, creating a vegan version might only require a few simple ingredient swaps. Others may present more of a challenge. For example, eggs play a critical role in cakes and muffins, including helping with moisture, structure, and emulsification. So bakers will need to find vegan-friendly alternatives that offer the same level of functionality. Many types of cookies, on the other hand, aren’t as dependent on eggs.

Substitutes for animal-based ingredients are plentiful and include plant-based proteins like soy and peas, polysaccharides like xanthan gum, and some types of molasses and syrups. Formulators will also have to ensure that any colors and flavors don’t come from animal sources.

The other challenge is on the processing side. Choosing the best equipment for vegan formulas will depend on the dough or batter’s consistency. For example, vegan cake batters may be sticky, which requires cutters and depositors that ensure batter separates cleanly and doesn’t stick to or build up inside the equipment. And adding too many vegan-friendly proteins to the mix could dry out the dough, disrupting moisture balance. The right equipment can assist with slower mixing times and issues with dough handling and final texture down the line.

Although consumers are becoming more mindful of how their food choices impact their health and the world around them, they aren’t willing to give up their favorite indulgences. Vegan baked goods align with consumer trends while satisfying cravings, so bakers should have no trouble getting their slice of the market.

If you’re not sure what the best equipment solution is for your vegan bakery application, our team of experts can help. Contact us today to find the right equipment for your line.